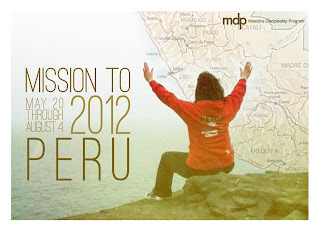 4-6You were all called to travel on the same road and in the same direction, so stay together, both outwardly and inwardly. You have one Master, one faith, one baptism, one God and Father of all, who rules over all, works through all, and is present in all. Everything you are and think and do is permeated with Oneness.

I WANT YOU TO GET OUT THERE AND WALK, BETTER YET RUN ON THE ROAD GOD HAS CALLED YOU TO TRAVEL...
It couldn't be more clear...
The next morning, I emailed Jim and TKay in Peru to tell them my decision was YES!
I kid you not, as soon as I sent the email to them, Jim's email WITH the packet of information came back to me...it was as if God was saying...the decision was between Me and you...and He didn't want anything to cloud it. Because after reading the packet...I was 10x more excited about the opportunity that was in front of me...
So, fast forward to today...I am both feet in in preparing for this journey and I am eagerly anticipating this adventure!
I will be co-leading this program with David M. and God has given us 7 college girls who will be spending 8 weeks with us in Peru as we live in community and serve with Jim, TKay, the ChildReach Staff and children at Hannah's. I am humbled and excited that I GET TO invest my life and the experiences that God has given me into these girls lives. Our summer will be focused on discipleship through missions along with studying the book of Romans as we learn who God is, what He wants us to be, and what He desires to do with our individual lives.
I covet your prayers for our team.
I will use this blog to update my journey prior to going and while I am there. I'm so grateful for all the encouragement and support I have already received...I am blessed.
Mission to Peru: May 20-August 4
Resting in HIS Faithfulness, definitely NOT disappointed, and COUNTING on Him to keep surprising me with HIS AMAZING PLAN! {Jeremiah 29:11-14}
~Amy
Posted by Amy at 10:42 PM 4 comments: